Babalú Ayé is a major Orisha and one of the most feared in the Yoruba tradition. He is an orisha of diseases, evils and misery. He is the patron deity of those suffering from smallpox, leprosy and other afflictions of the skin. The influence of this deity grew from a single tribe in West Benin to many tribes spread around the western coast of Africa.

His cult comes from Dahomey (Benin), where he was named Asojano. In Yorùbá culture, the name Babalú Ayé means “Father of the Earth” while in Africa he is known by the name Sampona or Sakpatá.

According to the Lukumi tradition, he is the son of Naná Burukú, raised by Yemayá. He is the husband of Oyá and the lover of Yewá. His brothers are Oshumaré and Irokó. Some rare studies say that he is also a half-brother to Changó who was the one who brought him to earth.

Some say that he was the direct son of Obbatalá. For the Ararás, he is the son of Kehsson and Nyohwe Ananou. It is also said that due to his disobedience and bad character, he was punished by Olofi (God) with sickness and affliction. He is also a protector of animals especially dogs.

Although this orisha can cause sickness, he can also bring about quick healing and recovery from any affliction. He is compassionate and humble. He is depicted as being covered in sores and skin infections. 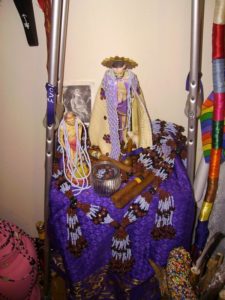 Day of the week: His day is Friday, although for others it is Wednesday

His receptacle is a large flat fryer and is covered with a gourd, guiro or semicircular lid that carries in its upper part a hole that will receive the immolations. On its sides it also has holes.

In the Arará rule, this lid is sealed with cement, painted in blue, red, white and purple colors while around the upper hole is decorated with cowries.

In the Lukumí rule the lid is not sealed.

His elekes are made of white beads with a blue finite stripe, others are made by interspersing Oya beads, red and black.

Two puppies, a pair of crutches and a wooden triangular bell. Other symbols include; reeds, cowrie shells, and a ritual broom which is used for cleansing and purification.

The suit of Babalú Ayé is made of a bag covered with snails.

You can offer roasted or popped corn, rum, beans, and other grains. Tobacco or dry white wine are also appreciated. Peanuts or sesame seeds shouldn’t be offered as they are considered as a taboo.

His favorite animals include; vultures, buzzards, and other carrion birds.

His favorite gemstones include; bloodstone, tanzanite, snowflake obsidian, and Jasper.

The Children of Babalu Aye:

The sons of Babalú Ayé pay great attention to the physical, mental and spiritual well-being of the people who surround them. They are constantly seeking to understand, to relieve, to help despite the fact that communicating costs them a lot.

They are lonely and complexed. These people instinctively support the sick, both for their bodily and emotional pain. They will look for the right, comforting words.

Babalu Aye is a loving but stern orisha. He is loved, respected and feared and he can only show his wrath to those who disobey him.

In Cuba, the rituals to celebrate the feast of Babalu Aye usually starts on the 16th of December. The Cubans gather to light candles and make offerings to this orisha. While staying awake till midnight they ask Saint Lazarus to watch over them and keep them healthy.

His altar is set up with his stones, food offerings, a white, yellow or purple candle, his statue and other items that are associated to him.

While those who are sick would ask for healing, others might ask for protection, wisdom, success and many other blessings.

During this ritual, his subjects are seen dressed in sack clothes. When possessed by this spirit, the devotee is seen walking and limping. His movements resemble those of a feverish patient. Sometimes, he pretends to scare away flies and other insects that perch on his sores. His speech is fiery and his nose is full of mucus.

He also makes gestures to sweep the air and clean it of bad influences. The possessed would also want to heal the wounds of those who watch the ceremony. While the ritual is ongoing, water is spilled on the floor. Then they would all wet their fingers and place them on their forehead and behind the neck. Then they kiss their hands to protect themselves against diseases. Finally, the dancers put themselves in a circle, dancing bent and limping.

Patron and assistant of the poor, the sick, and the downtrodden

Helper of the forgotten, forlorn, the disrespected ones

With this prayer I request your compassionate assistance

And with the aid of Olodumare,

May you always protect me during sickness

And also, in good health

Babalu Aye, give me the strength to overcome obstacles

And to achieve my full potential during my sojourn on Earth

Babalu Aye, help all those who cannot help themselves

And remain always by my side