Orisha Inle also known as Erinle is the spirit that lives in-between the space where the salty sea meets with fresh river water. In Yoruba dialect, Erinle means: “The food that Earth gives”.

This deity is considered as a healer and physician to other deities due to his association to health and medicine. He was also a mighty hunter of the land and a fisherman who later became an orisha.

The cult of Inle has its origin in Ilobu, a Nigerian town, where the Inle River passes. History stated that he defended the Yorubas and fought against the Fulanis.

This orisha is a strong and healthy-looking warrior with flowing hair plaited in seven braids. He has an androgynous appearance due to his feminine features. Inle is often seen adorned and dressed in cowrie shells, beautiful bird feathers and corals.

He is also seen with snakes wrapped around him. Inle is not just the patron of nurses and doctors, he is also a patron of homosexuality due to his elegant look.

Inle is the son of Obbatalá and Yembó. His companion was Abata , who was a very industrious partner. She acted as the nurse who assisted Inle during his healing practice.

Inle had an affair with Yemaya and during that period she took him beneath the sea and showed him kingdom and riches. She wanted him to remain underwater with him forever but Inle wasn’t comfortable as he wanted to go back to his abode on land. During his stay in the waters, he also met with Ochun who fell in love with him because of his handsome appearance. The had an affair and she bore him Logun Ede.

Finally, a day came when Inle decided to leave and as he was about to go, Yemaya cut off his tongue because she didn’t want him to reveal all that he saw beneath the sea to anyone. For that reason, Inle can’t speak and he only speaks through Yemaya. He speaks through diloggun Oche-Oddi(5-7) and Oddi-Oche(7-5).

Inle also had an inseparable best friend named Ochosi and Buyoto is the spirit that walks with Inle. He is represented by the trident and fishing pole that is placed in front of Inle.

Tobia is another helper of Inle who is represented by the fishing hook. Asao is another great friend of Inle that accompanies him everywhere he goes.

He is a nice orisha who never hurts anyone. He is the comforter of families and homes and he is often consulted to alleviate the affliction in any home. Although, Inle main profession was hunting and fishing, he was able to become an excellent healer because of the virtue of Olofi that he possessed. Inle was also a great warrior and fortune teller.

This Orisha is known to create a balance between the earth and water, salt and sweet water, hunting and healing and between feminine and masculine.

He is syncretized with the Archangel Raphael, whose name means “God heals.”

Inle is an orisha that represents fishing and pre-horticultural harvesting. He is represented in nature by a fish. He can also be seen holding a dagger, staff or a fishing hook.

Inle favorite colors are white, sea green, blue, yellow, pink, indigo, turquoise, and coral. He expects all his animals to be white and spotless.

Inle tools include; a trident wrapped in snakes, three fish, a bow and a spear. These tools are used to represent prosperity. Also, his soup tureen is usually blue and green and you can also incorporate fish motifs into it.  His eleke is made of green, blue, yellow, and coral beads. 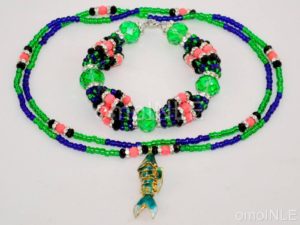 He also loves precious stones, music, and art. The leaves of the Alamo plant, (ficus religiosa), are a taboo to him.

He loves to be offered ram, cock, pigeons, guinea fowl and all animals must be white in color.

How to Create an Inle Altar:

Characteristics of the Children of Inle:

Like other Orishas, Inle can be communicated with by throwing the obi. To invoke him when throwing obi, say:

God of medicine, give me the salvation that you as a Divine Medic can.

You who sacrifice yourself to save your children from sickness,

You who with your fish in your hand scared Death away from wherever you went.

You stayed and healed the sick in every town you visited,

Thank you my father Inle.

If you desire to pray for physical, or emotional healing for yourself or a loved one, then set up an altar to Inle. Light a healing candle and call out to him for assistance. You can offer him offerings of metal charms, and images depicting fish, or even a fish-shaped candy.