Orula also known as Orunmila, is the orisha of divination through the oracle of Ifa.  It is said that when Olodumare created the world, Orula was present as a witness. For this reason, he is considered the first prophet of Olodumare.

Orunmila was sent by Olodumare to control the births, mortality, growth  and development of human beings and other species. Orula was seen on earth between 2000 and 4000 AC with the 16 celestial ancestors (the Meyi of Ifá). He represents the security, support and consolation before the uncertainty of life and with his aid everything is possible.

Orula’s celestial parents were Orokó and Alayerú while his earthly parents were Obatala and Yemu. He had two children with Oshun, his best friends are Elegguá and Chango and he forms a trinity with Oddun and Oddúa.

Day of the week: Thursday

Syncretized as: Saint Francis of Assisi

He doesn’t dance because he can’t bend lower but dance moves are made in his honor.

Orula’s children are the babalawaos who work with the oracle of Ifá. They also work with Shango, who also has the knowledge of divination and Elegua, who watches over the faith of humanity.

Due to their spiritual and peaceful nature they are usually quiet, wise, detached and generous.The male followers of Orula wear a bracelet that symbolizes the hand of Orula and the women carry the Orula box.  To become a babalawo one must receive the hand of Orula and dedicate himself completely to the worship of this deity.

In conclusion, I would like to say that Orunmila is the spirit of intuition and premonition. He gives us an insight of everything that happens around us. He is the prophet that gives us the map of our destiny. Apart from his ability to predict the future, he is also credited with healing powers and whoever ignores his recommendations would suffer the consequences. 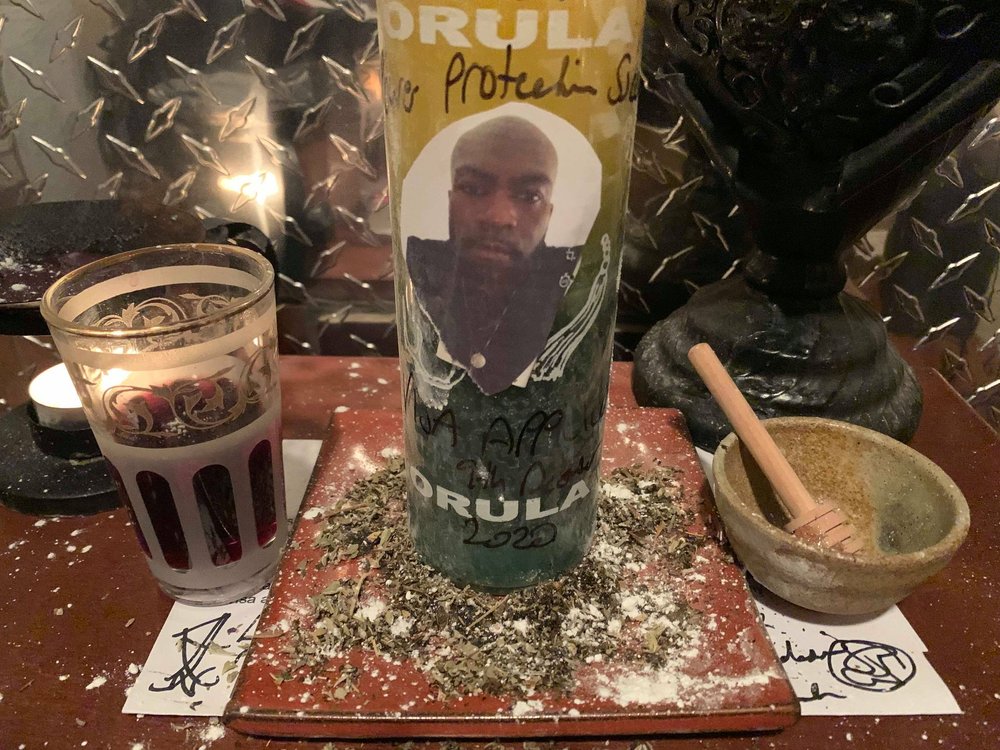 Sometimes there is a calling to work with a specific spirit when we work with certain clients. We do not question the calling, we just go with the flow. We find that this provides a better and more successful result for the client.

In particular and for example, a client of ours was looking to focus on his residency in the UK. Even though he is on the darker path, we still were able to achieve success for his petition by submitting the offering and candle to Orula on his behalf.

Naturally I offered wine, and some honey that I purchased locally in New Orleans. Herbs and oils were chosen for both protection and for success. The client himself also wears a very powerful protection talisman. I also considered the most auspicious day to light the candle. In this case Orula is most receptive to working with him on a Thursday, so that means in candle work you light the candle on a Thursday.

With all of these considerations, and in conjunction with petitioning the spiritual world, the client achieved his permanent residency.

If you are nervous or unsure about working with the spirit or any other Orisha, I would suggest that you don’t overthink things and you just do your best to try and be the most considerate to what the spirit likes. They are not as judgemental as what you may believe they could be. In this case I did not say “specific” prayers, I just petitioned what the client truly needed, and I humbly requested the spirit’s participation in helping him achieve what he needed.

My advice is always to begin magic, always be respectful, take notes along the way, and enjoy what you’re doing!