Voodoo can be defined as a set of beliefs, rituals and practices that present magical aspects that can change the lives of human beings. Voodoo comprises of practices that include fetishism, worship of snakes, ritual sacrifices and use of trance as a means of communication with different deities. In voodoo worship, there are different symbols that are used such as the circle, the pentacle, the spiral, the triangle, etc.

This forms the sacred place that contains the energy and provides protection to the practitioner during the ritual process.

Each culture has a unique way of tracing their circle and it is believed that the circle forms a protection barrier between the voodooist and the spirits summoned. It also helps in the concentration of the energy used in the ritual.

This is a symbol of revelation and its three realms represent the spirit, energy and body. The spiritual realm signifies the will, intellect and feelings while the energy level signifies power, order and life.

In the material world, the uppermost of the angle represents neutral casual energy which divides into electrical and magnetic charge and takes a material form in the horizontal basic line.

The triangle is often drawn outside the circle and should be large enough to contain the entity being summoned. You can draw with a sword or chalk but ensure to be fully concentrated while drawing. 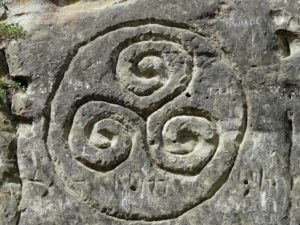 Also known as triskelion or triskele, this magical symbol is useful in aiding meditation, and enhances the comprehension of the ritual connection. It represents three levels: spiritual, energetic and material.  Its spiral possesses transmitting effects. When used in the form of an amulet, the triskele strengthens the will and can bring changes on all levels. 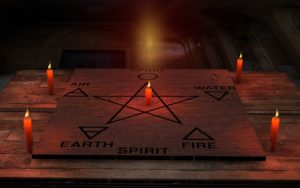 The circle around the star symbolizes the sacred space. The pentacle is often used to summon spirits and ban unwanted spirits and energies. It is drawn with a single stroke.

These are drawings that are made to symbolize the gods that are been worship. This practice originated in Africa and is common among the Haitians.  Unlike other traditions that represent the gods with statues and pictures, the Haitians are known to use veves in their ceremonies.

During a ritual, the priest draws the veve of the gods on the ground and while he does this, the followers chant praises of worship to the gods. This uplifts the energy in the ritual premises.

It is a universal symbol that can be traced in two ways:

It is the symbol of the interactions between the physical world and the energy world. It can help you to travel to other worlds and to return you must pass through the same way you came.