The traditional Haitian voodoo worship ceremony is the foundation of the voodoo rite. This ceremony comprises of; the place of worship called the hounfor, the priest called Houngan, priestess called Mambo, ritual objects, followers, offerings and prayers.

The hounfor is designed to have an inner and outer chamber. The sacred chamber contains the altar and is reserved for the priest and priestess whereas the outer chamber is for the worshippers.

At the center of the temple, there is often a post reserved for the spirits. This post is called Poteau-mitan. From the floor to the ceiling of this post is decorated with a spiral design to represent two serpent gods; Damballah Wedo and Ayida Wedo. The color of this decoration depends on the rites being celebrated. The post is placed at the center of the temple because it is the cosmic axis of the voodoo magic.

It designates the vertical axis indicating the communion between the supernatural spirits; the deities and the loas.This is the central axis of the ceremony. Dancing is done around this post by the hounsis and those possessed by the gods.

Although, sometimes a voodoo temple might not have a visible poteau mitan but there is always an invisible one.  The main gate to the hounfor is often denoted by two trees sacred to Legba.

All voodoo celebrations begin with a ritual of invocation to the guardian of paths to open the doors of spirituality. The priest or priestess and the congregation open the ceremony by calling on Legba to open the spiritual gate so they might go in.

Then, the worship space is sanctified by a throw of water on the ground and the offerings to the Loas are deposited at the foot of the poteau-mitan. The veve of the deities concerned with the ritual are drawn on the ground.

Sacred ritual objects are placed on the cardinal points and poles then the devotees engage in ritual dance to the sound of drums and other instruments. The drumming and dancing establishes a connection with the spirit world. 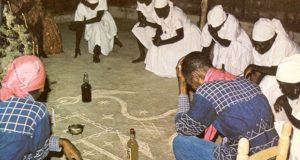 After a connection has been created then sacrifices are offered to the deities. The sacrifices range from food, drinks, blood of animals, humans, etc. The sacrifice is dependent on the Loas that are being honored and their specific demands. In cases of animal sacrifices, after the killing of the animal, the blood is poured on the altar then invocations are done with the corpse at the four cardinal points.

While the drumming continues, some initiates decorate themselves with the blood of the sacrifice while calling out to the Loa to possess them. When finally possessed with a Loa the individual is seen to deliver messages from the Loa to the followers. During possession, the initiate can be seen to perform great magic like piercing oneself with sharp objects without feeling pain. If along the line the individual loses consciousness, the other followers assist him to a safe place until he recovers.

The pattern of voodoo ceremony is dependent on the tradition of the people and the Loa being worshipped. The different practices carried out during a voodoo ceremony such as sacrificing of human blood, can be seen as weird to a non-voodooist but a true voodooist is bent on offering whatsoever is required of him as long as it pleases the Loas. Besides, some go as far as offering their own lives with the hope of getting an eternal reward.