Each year, in the month of July, thousands of pilgrims move to a waterfall located 150 km north of Port-au-Prince in Haiti to worship the gods and goddess of the water. According to popular legend, in 1847 Erzulie Dantor, the voodoo goddess of beauty and love, appeared on a palm tree in this waterfall, and began to heal the sick and perform miracles.

The Catholic priests considered this assumption as blasphemy because they believe it was Lady of Mount Carmel that had appeared to bless the Haitian Christians. The priests ordered that the tree be cut then a church was erected few meters away in honor of Our Lady of Mount Carmel.Since then this waterfall became a ritual venue for voodoo worshippers as they gather from all over the country to pray for healing or to ask for favors during the July 16th celebration. 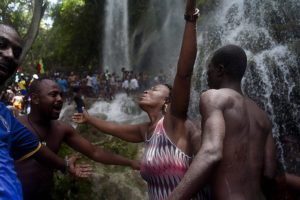 When the voodoo worshippers arrive at the waterfall they commence with the ceremony rituals. The ritual requires that the consecrated women purify their bodies and cleanse their sexual organs with a liquid extracted from a bottle full of herbs.

Violent movements, dances and a continuous intake of alcohol commence and voodoo priestesses lend their bodies to be possessed by the spirits of the dead.

During this celebration voodoo worshippers bath and swim in the water. They dance and chant different songs to the honor of the gods and goddesses. To receive favors from the spirits, they make offerings and mix different herbal perfumes and potions prepared for this worship. In the process some people become possessed and might start acting like zombies.

The worshippers spend hours in the freshness of the water, praying, hugging, etc. Many throw their old clothes to the sky or tear it into pieces as a symbol of a past that they want to leave behind. Others consult the hougan or the mambó possessed by the loas for miracles and blessings.  Another essential characteristic of this religion of African origin is its profound fluidity, partly because it has no liturgy or written theology, and partly because of the various influences it has received from other beliefs. 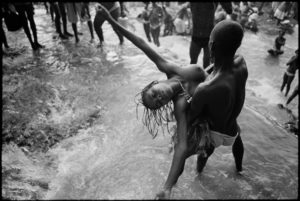 This ceremony attracts people from all parts of Haiti and the world with different heart desires. Some women embark on this journey to request for the grace to conceive a child, others hope to get a sick relative healed, and there are also those who dream of obtaining a visa and traveling to US to start a new life.

Near the waterfall, men and women sell candles, blue and white laces that represent the loas and images of the Virgin of Carmen. As the dancing and drumming continues some people go into trance and move frantically while  prophesying.

Thereafter, when the sun goes down, the atmosphere relaxes and becomes full of spirituality. Some women throw perfumes created from tree leaves to obtain love, good luck, while praying with their hands together and circling the trunk.