Satanic practices seem terrifying to many people and there are mysteries surrounding this religion. There are numerous symbols used in Satanism, unfortunately, only few Satanists know the true meaning of these symbols. Each satanic symbol has a powerful spiritual meaning and creates a connection between humanity and the spiritual entities. They are used as representatives of the physical and spiritual elements.

Below are descriptions of  some common symbols used in satanism and witchcraft.

They are used as instruments of luck and divination, because they supposedly contain revelations and prophecies of the world. The pyramids symbolize the trinity of demonic idolatry: Nimrod (father) Semiramis (mother goddess) and Tammuz (son god). They give off positive electric discharges and concentrate cosmic powers.

This symbol comes from the inverted form in which Saint Peter was crucified. Satanists use this symbol to mock Christ. Its true meaning symbolizes the right way to align the chakras.

This is associated with good luck and fortune and was introduced by the druids of Scotland and Ireland.  It represents a way of giving Satan control over ones finances; to obtain prosperity with his help … It is also used to protect oneself from “Maluka” or “Evil Eye”.

THE SIGIL OF LUCIFER

Also known as the “seal of Satan”, it is a symbol used to invoke Lucifer. Its origins are linked to the symbolization of fallen angels. It is used by modern Satanists and has its roots in magical practices.

Baphomet is a goat-headed human used to represent Satan. It represents the androgynous, magic, sexuality, life, and personal enlightenment achieved in the context of occult practices.

It alludes to the union between the fallen angels and the daughters of men as can be seen in its mix of feminine and masculine traits.

Used in witchcraft and occult rituals to evoke evil spirits. The Satanists use it 2 points up and the pagans use it a point up. It does not matter if there are two points or one; it does not matter if it has a circle around it because any form in which it is used symbolizes evil.

It is the symbol of death and used to lay curses. In satanic rites it serves as a vessel to place the blood of sacrifices. It is used on several occasions by young people in necklaces, rings and earrings. The negative influence is very strong in their use.

The Eye of Providence is considered satanic because it is a Masonic symbol. It was also said that Lucifer was “the light bearer” in the Bible, so his eye is illuminated.

Also known as the Cross of Leviathan, is a variation of the alchemical symbol of sulfur and was used by alchemists in the Middle Ages. The smell of sulfur has historically been identified with hell. For LaVey, the Satanic Cross has phallic connotations.

The number 666 is representative of the beast in the book of Revelation. The beast was a representation of Satan, so the number is linked to Satan himself and satanic beliefs. It is also believed to be the mark of the antichrist. 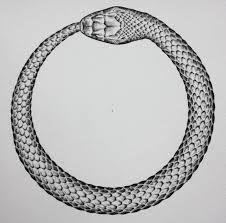 This representation of the snake or serpent that devours its own tail is a symbol of eternity, since the end of the serpent is attached to the beginning, forming an endless circle.

Also known as “the Egyptian cross” or “the cross that is tied”, it symbolizes eternal life and is associated with air and water as life-bearing elements. For that reason it was considered as “the key of life” and it was used as an amulet. It represents the rituals of fertility and the spirit linked to the power of union of the masculine (straight line of the cross) and the feminine (circle).