The Simbis are a set of fiery serpent spirits that live in the oceans, rivers, springs and marshes. In Haitian Voodoo, the Simbis represent a wide range of Loa, all associated with water. Vodou spirits are classified into Rada and Petwo. The Rada spirits are cool spirit and are common in Africa whereas the Petwo spirits are stubborn spirits mostly common in Haitian tradition.

There are over 27 different spirits that make up the Simbi nation and they are all associated with different attributes and magical power.  The image of Mamiwata is often used to represent the Simbis but most of these spirits are males.

It is often believed that people who get missing in rivers and oceans are being abducted by Mamiwata. These individuals become slaves  in the underworld and are sent back after some period of time.  The obedient servants are blessed with precious gifts. The spirits of water often abduct beautiful individuals.

Some of the Simbi Loa include:

Simbi Andezo:  He is the spirit of rainfall and fresh water . He grants protection against magical evil.

Simbi Dlo: He is the Loa of fresh water.

Gran Simba:  She is the wife of Simbi who gave birth to forty daughters. She saves people from drowning in water.

Simbi Anpaka : He is called the Herb Master. This loa is in charge of plants, leaves and poisons. When called upon, he heals people with herbs.

Simbi Ganga: He is the warrior and guardian spirit.

Simbi La Flambeau: This loa is responsible for generating energy and electrical fire.

Simbi Makaya: He is a very powerful and protective loa often referred as the master magician. He is also a loa of communication who conducts the souls of the dead in all directions.

Colors : according to the Simbis; blue and green for Dlo; turquoise and red for Andezo; black and red for Makaya.

During  Simbi  Voodoo  ceremonies, the priest or priestess draws the Vevé of the Simbis on the ground with a chalk or the ritual knife. As in Damballah, the Vévé includes a snake and a pool of water. 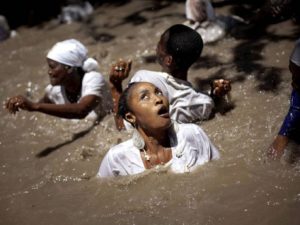 A pool of water is installed on the peristyle of the ceremony. This pool of water isn’t always deep and serves as the communication channel between the worshippers and the spirits. When a worshipper gets possessed with a spirit and writhes in pain, he is taken to the water channel to soothe his pain.

The ceremony is characterized with singing, drumming and dancing to the praise of the loa. Depending on the tradition of the people, ritual bathing is often carried out to purify the worshippers. During this process, some of the worshippers become possessed and start prophesying. Different sacrifices are made ranging from food items to animal blood.